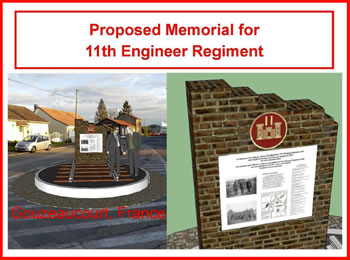 President Wilson’s Declaration of War in April 1917 marked the United States’ entry into World War I. General Pershing, commander of the American Expeditionary Forces, understood the significant challenge associated with moving troops and supplies to the German front and immediately began recruiting efforts to staff three Engineer Regiments that would be dispatched to Europe in advance of US forces with the mission of preparing the rail lines across France for the forces and equipment to follow.

The 11th Engineer Regiment (Railway), comprised almost entirely of New York railroad worker volunteers, arrived in France in August 1917. It further deployed to Gouzeaucourt, just south of Cambrai, with a mission to improve the rail facilities in that region.

On 5 September, with less than a month in theater, the 11th came under a German artillery attack suffering the first US casualties of the war. Then on 30 November at Gouzeaucourt an 11th work detail was nearly overrun by a German attack during the opening days of the Battle of Cambrai. The 11th, the first US unit to engage the Germans in combat, suffered many casualties but gallantly withstood the German assault until British forces could reinforce their position, ultimately repelling the assault and securing the rail head.

Dalton Ranlet was a 17-year-old railroad worker from Queens, NY who lied about his age to enlist. He deployed with the 11th Engineers in August 1917, was mortally wounded during the German attack at Gouzeaucourt and later declared Missing in Action. In 2010 Linda Gagen, PVT Ranlet’s niece (daughter of Ranlet’s sole surviving sister), was researching the family history when she discovered her uncle’s name on a grave marker in the American Cemetery at Somme. Over the next few years Ms. Gagen continued her quest to learn more about the details of when and where her uncle’s remains were found, identified, and interred. In the process she contacted several French citizens who went out of their way to assist her. In 2014 she traveled to France where she met the mayor and other officials who provided a warm, friendly reception and the answers to her many questions. The rest, as they say, is history, and brings us to this important and logical progression of memorializing the actions of the US Army’s World War I “First To Fight” unit, the 11th Engineers.

During the meeting between Ms. Gagen and Gouzeaucourt officials it was noted that a number of memorials existed in the area to celebrate units that participated in the Battle of Cambrai but there was not one for a US unit. The idea of a memorial for the 11th Engineers had been explored before but always shelved due to the lack of a sponsor and funding. With Ms. Gagen’s persistence the concept worked its way back to the States, to the Engineer Museum at Fort Leonard Wood, then to the 11th Engineer Battalion at Fort Benning and finally to the 11th Engineer Battalion Association who agreed to initiate a fund-raising effort to make the Memorial a reality.